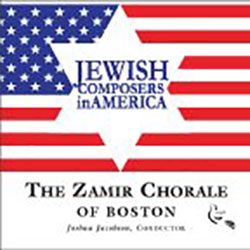 This album explores the cross-pollenation of Jewish and American musical influences. The first half of the album focuses on Jewish liturgical music written by Americans; the second half reflects the Jewish influence in American popular music. Recorded live at our hugely successful Jordan Hall concert (read the Boston Globe’s review) and other performances in the last two years.

Bringing the joy of Jewish music to your home…

We hope you enjoyed our weekly Musical Messages that we posted the past year. We were delighted to hear from so many of you asking us to continue sending them. Remember, you can still watch all of our online programming.

Jewishchoralmusic.com, Zamir's free resource for choral leaders and conducting students, is being nationally recognized for filling a void during "social distancing". The American Choral Directors Association (ACDA) highlighted the site among its Resources for Choral Professionals During the Pandemic. While choral leaders and educators had more time for learning and planning, jewishchoralmusic.com introduced them to new treasures. The enriched site provides a core online/podcast curriculum on the history of Jewish music, and lets them peruse compositions for days on end! See what ACDA has to say here.