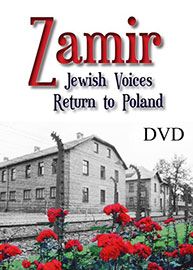 In the summer of 1999, the Zamir Chorale of Boston celebrated its thirtieth anniversary as well as the centenary of the Zamir movement with a concert tour of Eastern Europe. Performances were given in synagogues and churches, concert halls and museums, restaurants and courtyards, cemeteries and concentration camps. In Warsaw, Lodz, Auschwitz, Krakow, Prague, Terezin and Vienna we gave honor to the dead and hope to the living. Now, you can share our journey.

A documentary film of our trip, Zamir: Jewish Voices Return to Poland, produced by Spy Pond Productions, was broadcast in August 2000 on PBS and premiered at the Museum of Fine Arts, Boston. Through this film, viewers across the country stood with us at Auschwitz and Terezin as we honored the memories of the dead, and joined the overflow audiences that greeted us in Krakow and Prague. Many of them shared their reactions with us.

Our live concert recording, The Songs Live On , is a companion to the songs in the video and is a witness to the excitement and spiritual intensity of our odyssey. You can preview three tracks from the CD right here on our website: LeDor VaDor by Cantor Meir Finkelstein, Al Mishkavi Beleilot from Yehezkel Braun’s setting of Shir haShirim and Hava Nagila.

We are now posting weekly messages with music that will “delight the soul.” We also are featuring monthly "Zoominars" on various musical topics taught by members of the Zamir musical staff. These one-hour sessions will be held Tuesday evenings at 7:30 PM on Dec. 8, 2020; Jan. 5, 2021; Feb. 2; March 2, April 6, and May 4. Topics TBA. You'll need to sign up for Zamir's email list so that you can register in order to receive the link.

WATCH "Kolot Nashim: Jewish Music by Women Conductors," a year-long program celebrating the many roles of women in Jewish music. The first major production was streamed on YouTube Premiere on November 17, 2020. It featured Artistic Director Josh Jacobson and Zamir alumna Lidiya Yankovskaya as co-hosts, interviews with composers Nurit Hirsh, Alice Parker and Meira Warshauer with video performances of their works, including the world premiere virtual performance of Warshauer’s “Place These Words.” Part two will be streamed on May 25, 2021.