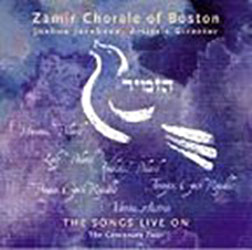 In the summer of 1999, the Zamir Chorale of Boston celebrated its thirtieth anniversary as well as the centenary of the Zamir movement with a concert tour of Eastern Europe. Performances were given in synagogues and churches, concert halls and museums, restaurants and courtyards, cemeteries and concentration camps. In Warsaw, Lodz, Auschwitz, Krakow, Prague, Terezin and Vienna we gave honor to the dead and hope to the living. Our live concert recording, The Songs Live On, is a witness to the excitement and spiritual intensity of our odyssey.

Zamir is very proud to present this unique recording comprising selections from our recent European tour. Recorded during live performances in Lodz, Vienna, Prage, Krakow, and Terezin, these songs celebrate the return of Zamir to the land of its birth. Ranging from liturgical settings to popular songs, spanning four centuries, and representing composers from seven countries, our tour repertoire demonstrated the breadth and quality of Jewish music for Jewish and non-Jewish audiences alike. The Songs Live On captures the energy of these live performances and the enthusiasm of both Zamir and our audiences. If you couldn’t join us in Europe, this is your chance to share in the music.

Bringing the joy of Jewish music to your home…

We hope you enjoyed our weekly Musical Messages that we posted the past year. We were delighted to hear from so many of you asking us to continue sending them. Remember, you can still watch all of our online programming.

Jewishchoralmusic.com, Zamir's free resource for choral leaders and conducting students, is being nationally recognized for filling a void during "social distancing". The enriched site provides a core online/podcast curriculum on the history of Jewish music, and lets them peruse compositions for days on end! See what ACDA has to say here.

Zamir is pleased to partner with the Mass Cultural Council, Department of Transitional Assistance, WIC Nutrition Program, and the Massachusetts Health Connector to offer the Card to Culture program, the most comprehensive effort of its kind in the nation to open doors to arts and culture experiences for low-income families.

This Arts Access program is not funded by MCC, MDTA, or taxpayers.

Manage Cookie Consent
To provide the best experiences, we use technologies like cookies to store and/or access device information. Consenting to these technologies will allow us to process data such as browsing behavior or unique IDs on this site. Not consenting or withdrawing consent, may adversely affect certain features and functions.
Manage options Manage services Manage vendors Read more about these purposes
View preferences
{title} {title} {title}